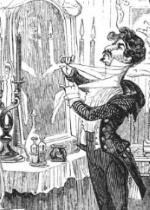 It seems fitting for a wedding necktie company to explore the origins of how men came to the ritual of knotting a piece of cloth around our necks. Metaphor for your wedding day? We think not. After all, it’s a necktie not a noose.

Naturally, I started my hunt for the history of neckties on everyone’s favorite search engine, Google. I knew upfront that the best place to get detailed information on such a mundane and archaic topic would be Project Gutenberg – a website dedicated to creating a digital catalog of books that are out of copyright, which means pre-1960 in the USA.

If anyone was going to record such a riveting subject, it would have to be a writer of some sort during the late Victorian era. Personally, a scene reminiscent of a Charles Dickens tale came to mind: staunch London fashion aficionado sitting comfortably in his high-back leather chair, stoking a coal fire and filling the office air with cigar smoke. Notes flying furiously as he records in great detail how the necktie came about. Fascinating stuff!

I tried all the usual variants in the search box that I could think: men’s fashion, early men’s neckties, and 1700’s neckties that don’t make you look like a pirate. That last one was particularly useful. I got some great tips for my pirate Halloween costume next year.

I slogged through a few ebooks on Project Gutenberg. I can’t believe how far we have devolved as a species in terms of our writing ability. The verbose grammar, spelling, and writing style in books written during the 1800’s is like learning a whole new language! I suppose in those days only educated individuals were able to put quill to paper and bang out a chapter or two. Not like today where any dolt who thinks he can start a blog, or necktie company, sits down to a computer and starts hammering away at the keyboard. Apes running wild comes to mind.

I quickly decided it was best to depart from the old Gutenberg website, rest in peace. I knew you briefly and may not be back. Unless I need a good topic sentence on ‘fashionable wigs to go with your necktie’ for my next article. Which I don’t.

I digress. If you really want to read about the history of neck wear, there are better resources available than I could ever hope to research and write. Here are a few that I found and have taken the liberty of providing a handy summary for you. Enjoy!